Does Your Business Have a FPE or Zinsco Panel?

Electrical panel brands Federal Pacific Electrical and Zinsco fail at an alarming rate. Because of this, they are no longer considered safe for modern buildings that use more electricity for modern machinery, etc.

Faults in construction and materials used have created conditions where these panels can allow overcurrent, leading to panels overheating. When something like this occurs, the heat may cause interior parts to melt and lead to electrical fire. Even if the panel looks okay, it doesn’t always mean that everything is functioning how it should be inside. More on FPE and Zinsco electrical panels below as well as tips on what to do if you have one.

The panel’s job is to protect your business by shutting down power when a surge is detected. To put it simply – they’re a safety mechanism meant to prevent electrical fires and shock.

What Are Federal Pacific Electrical Panels

Federal Pacific Electric Company was a prominent circuit breaker manufacturer in North America between the 1950s to 1980s. Being the popular choice for electrical equipment of the time, their panels were installed in many homes and businesses throughout the country.

FPE breakers were designed with materials prone to weakening with time. As a result, it’s been found that the breakers may not trip when needed – potentially leading to electrical fire. These panels often don’t meet modern safety codes due to long-standing issues with their design and frequent malfunction. In fact, it’s estimated that around 2,800 fires and $40 million in property damage occurs due to FPE panels every year.

What Are Zinsco Electrical Panels

Zinsco is a brand of electrical panel that was frequently used in North America between 1930 to the mid-1970s. Like FPE, Zinsco was a popular brand of panels and installed in numerous buildings throughout the United States. In 1980, however, production came to a sudden halt after serious design flaws were discovered.

While production of new panels was stopped, Zinsco brand panels were still making their way into homes and businesses across the country. Unfortunately, since many had already purchased the panels prior to production shut down, they were still being used.

The Hazards of Zinsco Electrical Panels

One of the most alarming issues with a malfunctioning panel is that you may never notice there’s actually a problem. Even if you remove the electrical panel cover, it may look perfectly fine at first glance. Since there appears to be no issue on visual inspection, the problem is often left to worsen until disaster occurs. By the time these panels are assessed by a professional, the breakers are often melted to the bus bars. If this occurs, the breaker is unable to trip and may allow for an unsafe amount of electricity to the building. This can lead to electrical fire as well as electrical shock.

While Zinsco panels may have functioned okay for homes and workplaces in the past, the growing demand in our electricity use means that these panels are at a greater risk of overheating and melting.

How to Determine Your Electrical Panel Manufacturer 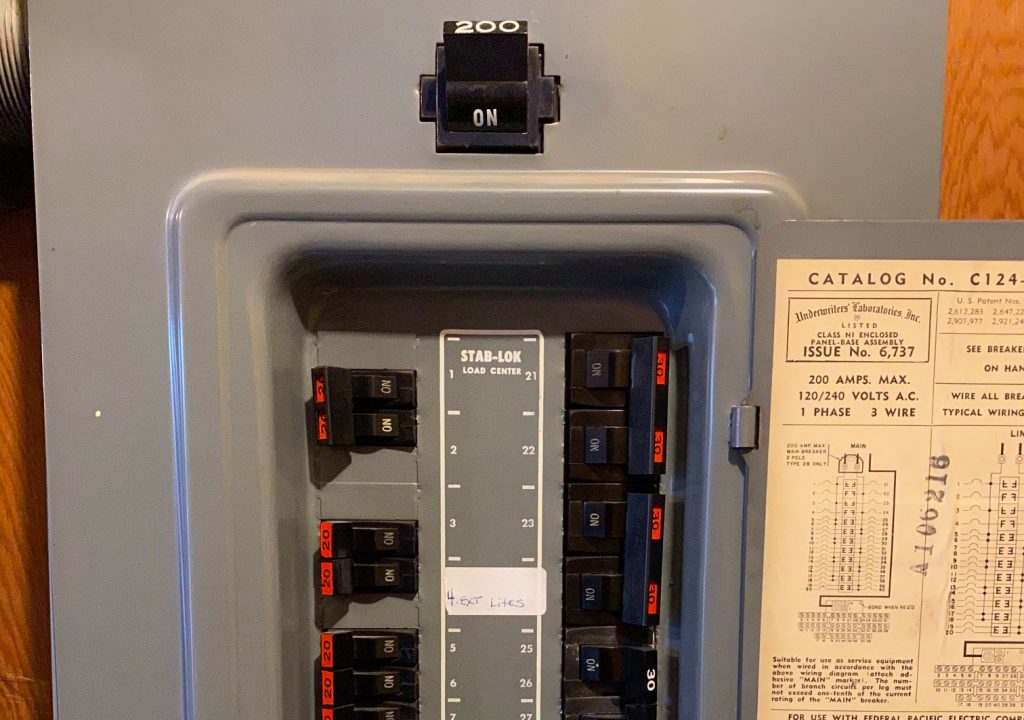 Once you’ve located the electrical panel, open the panel door and look closely for any stickers or raised lettering. Manufacturers typically either place their logos on the back of the door itself or on the sticker placed in the same spot.

With Zinsco panels, however, you may also find a logo sticker placed directly above the breakers themselves.

If you have an FPE or Zinsco electrical panel, and it hasn’t been inspected for some time, call a professional. Even if it seems like the panel looks fine on the outside, it doesn’t mean there aren’t problems inside. The only way to ensure the safety of your workplace or home is to have the panel inspected by an electrician.

Looking for a Professional Electrician in Pierce County?

Whether you need rewiring work, electrical inspection, or other electrical services – Tapps Electric is here to help! Our expert team of licensed electricians provide commercial services throughout the Pierce County area. Give us a call today or fill out the form on our website to get your FREE estimate!